Nestled among the hills and overlooking the cool blue water of Jumping Lake, lies the now abandoned hamlet of Waitville.  It's official location is the South West ¼  Section 15, Township 45, Range 24, West of the 2nd Meridian and 1.5 miles west of Highway 20, north of Crystal Springs, SK and north east of Jumping Lake.  Waitville is in the north-west part of the RM (Division 6).

Waitville came into existence when the C.P. railway from Lanigan came to the area in 1929.  Along with surveying crews, brush cutters and other work crews, men were making their way through heavy timber and hills to meet up with the C.N. railway at Northway, just south of Fenton.  It crossed the South Saskatchewan River using the C.N.R. bridge and railway line to Prince Albert.

The passenger train which started operating in 1930 provided much needed service to the community.  Daily passenger service north to Prince Albert, leaving early in the morning and getting back around 10:30 at night, gave shoppers a full day in the city.  Going south to Lanigan, you could catch a train going east or west, or stay on and go to Regina.  Roads in the district were not very good at the time, few had cars, so the train service was used extensively for travel.  The rural area shipped cans of cream to Prince Albert or Humboldt.  Grain hauled to the elevator was by team and wagon, so these long trips to Birch Hills or to the south were eliminated.

The first few years after the railway came through, new people were moving in, homes and buildings were built (a station, section house, elevator, church, blacksmith shop, a hall and later a school).  Ron Omand operated the first grocery store.  Ben Cook operated a general store.  The hall hosted dances, church suppers and various receptions.  The blacksmith, Mike Olexon, his wife Mary and their family (9 children) came to Waitville in 1937.

The Searle grain elevator had a number of agents looking after the grain handling business.  It had a struggling existence though, and closed up in 1962.  Arnold Braaten was the last agent there.

By the 1950's, with improved roads, more cards and better jobs, the population declined and only a few houses remained. 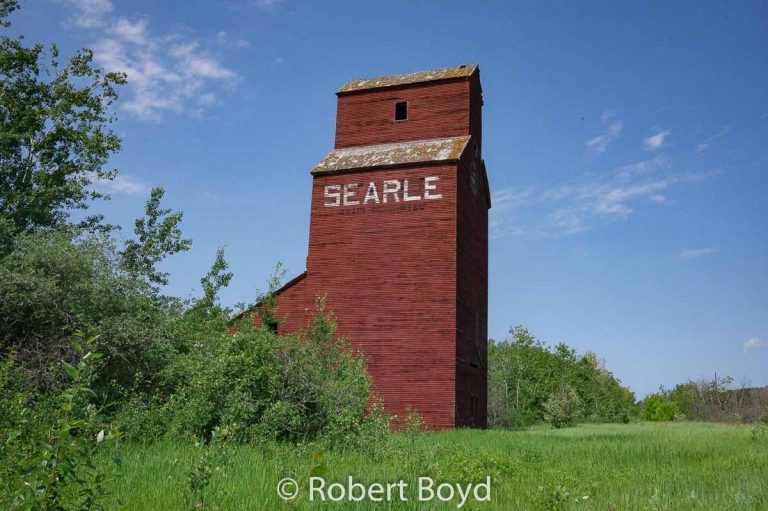 In 1947 a second school was built in Waitville on NW ¼ Section 10, Township 45, Range 24, West of the 2nd Meridian and opened in 1948 under William Senchynia.  The school stayed open until 1958 (Daisy Reid was the last teacher there), when the students were conveyed to Dixon Lake School in Crystal Springs.  Howard Johnstone was the first bus driver for such students and remained so for 15 years.

The school building was later moved to Crystal Springs where it was used as a class room, then a teacherage and continues to exist to this day as a private residence.

The hamlet was named after Finley Wait who, in 1907, opened the first post office in the district in his log house one mile east of the hamlet  [Source: What's in a Name (3rd ed.), E.T. Russell]