In 1907, prior to the organization of the Rural Municipality of Invergordon, No. 430, the Local Improvement District of Avondale came into existence as the first form of municipal government in the area.  The first meeting was held on May 10, 1907 with Sam Borsa as Chairman (representing the Tarnapol area) and Richard Reid as Secretary-Treasurer.  Also in attendance were Daniel Gordon and George Riddle.

The history of the Rural Municipality of Invergordon, No. 430 comes from a combination of articles and sources over the years, dating back to 1911 when it was first organized.

A petition was signed by Ernest Fisher declaring the desire of 57 out of the 372 residents to organize the municipality under the Rural Municipality Act.  The members of the Municipal Committee were responsible for the gathering of the signatures for said petition.  Considering the fact that in 1911 roads were only trails at best, one can speculate on the expense of time and effort that the project must have entailed. 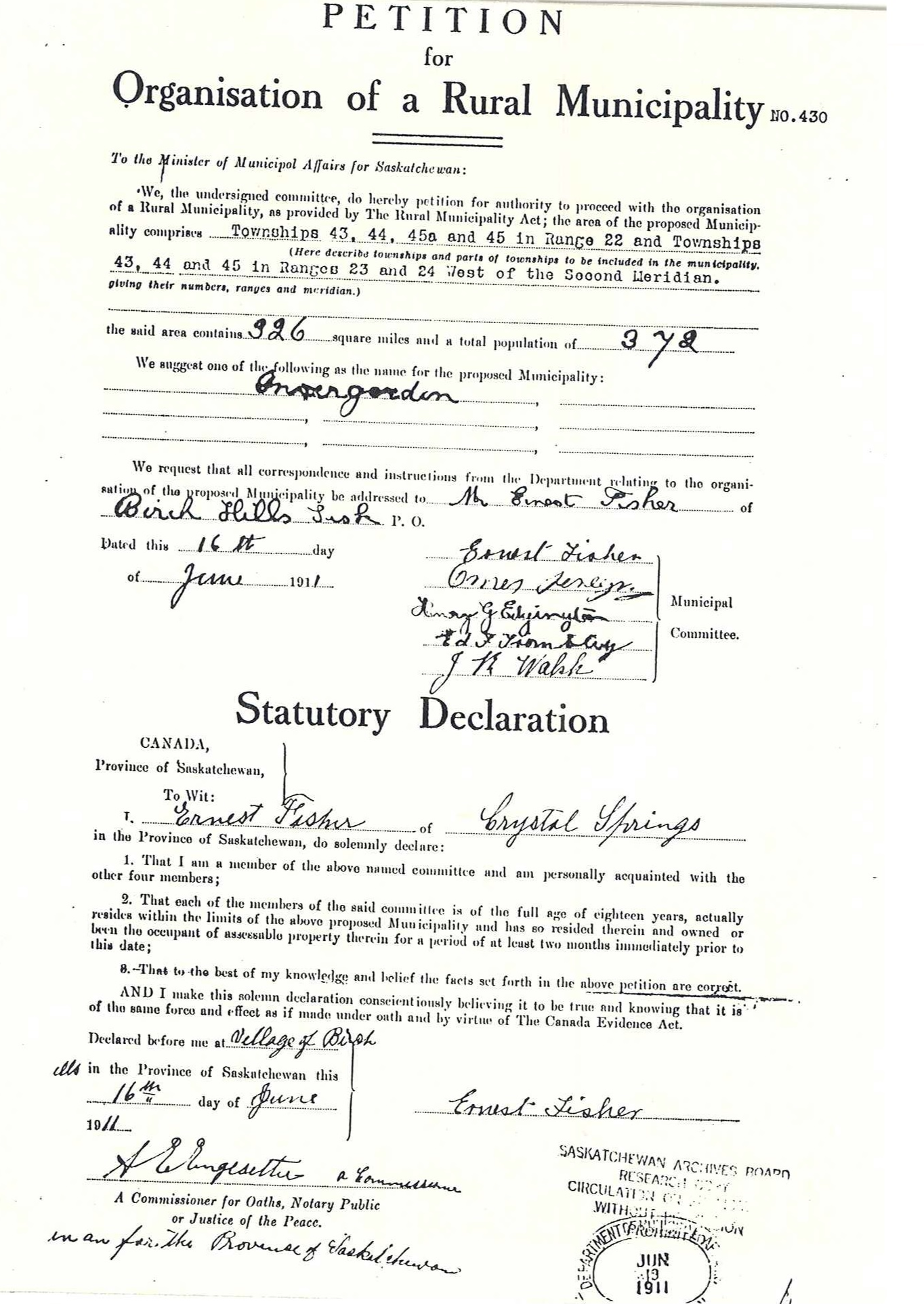 Minister of Municipal Affairs, P. McNab authorized the Municipal Committee to proceed with the election to determine whether or not the municipality should be organized.

An electoral win officially deems the area as the Rural Municipality of Invergordon, No. 430.

Interestingly, the Secretary-Treasurer was also the Registrar of Vital Statistics.

Roads were of primary concern at the time.  Ratepayers requested only that their children have passable walking trails to school, as sloughs and bogs could prevent them from attending school for months at a time.

Unfortunately, minimal documentation appears to exists from 1912 to 1921 other than a listing of municipal officials.

Taking steps towards remedying poor road conditions, Division 6 Councillor Lawson Wilson, elected in 1919, signed an order on behalf of the R.M. to purchase a 14" Brush Breaker for $99.00 from F.W. Gerber of Birch Hills, a dealer for the International Harvester Company of Canada.

Dr. L.E. Mylks of Birch Hills accepted an appointment as Municipal Health Officer, naming a retaining fee of $25.00 (plus an unspecified mileage rate).

The R.M. receives an invitation from the Saskatchewan Association of Rural Municipalities (SARM) to attend its annual convention in Saskatoon.  The invitation includes a drive around the City in one of their new 1924 STAR cars, indicating that "after seeing these cars and riding in them, we know you will carry home with you warm words of praise for the performance and riding qualities of the STAR, the car which has created country wide interest'.

The R.M. offered gas or grass seed to farmers who would plough and seed the road allowance adjoining his farm.

An acre of land required for road diversion (e.g. around a slough) was purchased by the R.M. for $15.00.

Among municipal duties, the Council also provided recommendation of individuals for postponement of military service.  The relief of indigents also came under their jurisdiction, for which $5,000.00 was expended that year.

The RM hosted its 100th Anniversary on October 25th 2011 with a banquet at the Yellow Creek Community Centre.

[Source:  The Road from Yesterday to Today:  History of Tiger Hills, Waitville & Districts (1984)]